Bramley born Geoffrey is the subject of many books detailing his bravery from Dunkirk to West Africa and cross channel raids on Occupied France and the Channel Islands.

Following service in the RASC, No. 7 Commando and No. 62 Commando (where he commanded the Small Scale Raiding Force) he was the first Second in Command of The Second SAS Regiment/2SAS.

Much of Geoffrey’s war was top secret. In recent years many hitherto secret files in the National Archives have been released. Recent books have greatly expanded the stories told by Geoffrey but “Geoffrey” remains the original definitive story, and the backbone on which recent books are based.

He was posted Missing in Action on 13 July 1943 (aged 26) near Sicily, Italy and his remains were never discovered.

The centenary of his birth was 20th December 2016 and on 11th November, 2016 he was unveiled on one of the new plaques at Bramley War Memorial and within our Book of Remembrance, now on display at Bramley Library, Hough Lane, Leeds.

The Book: “Geoffrey, The Story of Apple of the Commandos and Special Air Service Regiment”.

Geoffrey’s father, John Ernest Appleyard, wrote an illustrated memoir to Geoffrey, published 70 years ago – this book is still a collector’s item not least, as it contains many of Geoffrey’s own words from his letters.

We have reprinted, in the UK, 700 hardback copies of this illustrated 200 page book. Copies are supplied with an individual numbered bookplate and specific numbers can be ordered.

Copies are now availlable at a cost of £11.99 plus free UK post and packing. They are posted First Class within 24 hours of receipt of order.

We have kind permission and support from his family to seek support to clean and restore his Memorial in Bramley Baptist Churchyard to its original condition when established in 1946, The only Memorial on consecrated ground outside of the Cassino Memorial, Itlay that names and pays tribute to this very brave man

All proceeds including donations, will be utilised to renovate and maintain the Appleyard Memorial.

Please purchase with your Debit or Credit Card through the PayPal form below – you do not need a PayPal account to purchase this way, just choose “Checkout as a guest” after ordering.

Copies can also be purchased from Bramley Ironmongers (opposite the Memorial). 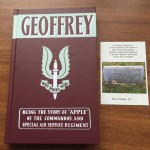 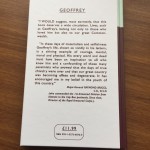 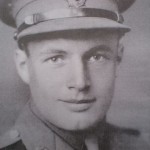