Please find below photos presented at our AGM on 19th October, followed by the Minutes of the AGM. 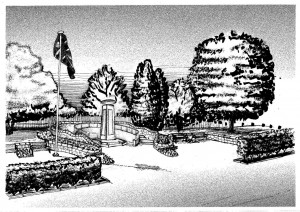 Viewpoint as per concept drawing 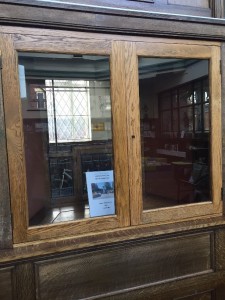 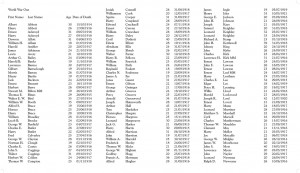 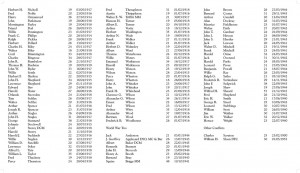 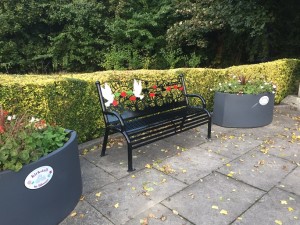 Friends of a War Memorial for Bramley.

The outgoing Chair, Cllr. Caroline Gruen welcomed all who were in attendance.

The following Officers and Committee were nominated, seconded and elected without opposition on a show of hands:

It was agreed that the Reverend Richard Coutts would continue to represent Stanningley.

The Chair delivered her Annual Report, which was circulated to attendees.

She covered the main events at the Memorial in the last 12 months.

Over 500 attended Remembrance Sunday and particularly moving this year, was the contribution of Judge Lawrence Saffer on behalf of the Leeds Jewish Representative Council and Mr Khatana, President of the Armley Mosque, bringing a very welcome interfaith dimension to the service.

We were pleased to welcome 5 Rifles again this year, attending specifically to remember and honour the late Sheldon Steel, the most recent member of our community to fall in service.  The occasion was solemn but at the same time reflected a community who care about each other and about the place in which they live.

The same pride and solemnity was also seen at the November 11th Service.

The Chair thanked Churches Together and Bugler Sally Clark for their continued support and participation and Norah Gibson for her work on all the Services.

On 1st July, we honoured the centenary of the Battle of the Somme. At 7.25am, in partnership with the Council’s Inner West Community Committee and as part of a City wide initiative, members of the community assembled for a sounding of the Reveille by our voluntary bugler Sally Clark with a second full service at 10.45 a.m.

The Chair thanked Annabel Gaskin, a co-optee of the Inner West Community Committee, researched, produced and provided an impressive display of historical pictorial boards which were displayed in local shops.

On September 15th we held a service in honour of the late Lance-Sergeant Fred McNess, who appears on the war memorial plaques and who was awarded the Victoria Cross for his bravery in the Battle of the Somme in World War 1 – the Chair was thanked from the floor by Ms. Joe Dobson on behalf of all the McNess relatives.

The Chair thanked by name all Officers and Committee members for their work and support during the year and made presentations of the first copies of the Book of Remembrance to Lynn Groves, Ian Johnstone and Dave Dubej for their work respectively on researching the new names to go on the Memorial and for work undertaken on the logistics side of Services and events at the Memorial

She was thanked for her work; her report is circulated with these minutes

The Treasurer, Jim Harrison, presented accounts covering the year from 31st August 2015 to 1st September 2016; these had been audited by DC. M.Schofield.

Major areas of Income were:

Major areas of Expenditure were:

Releasing of donations from Appleyard family towards book costs.

The Accounts were adopted by the meeting and the Treasurer received a vote of thanks for his work, his report is circulated with these minutes.

The Fundraising Officer reported on current and future initiatives including; local fundraising initiatives, with around eight initiatives in the last 12 months primarily aimed at raising funds for the Peace Garden or infrastructure at the Memorial.

She also detailed the reprint of the Geoffrey Appleyard Book, where all proceeds after print/postage costs would go to the renovation and upkeep of his Memorial in Bramley Baptists.

The Fundraising Officer received a vote of thanks for her work; her report is circulated with these minutes

The Archivist detailed a research request from the past weekend and detailed key statistics for the last 12 months:

Over 140 research requests had been made and completed since the last AGM.

All gaps (i.e. age) on the current plaques have now been fully researched and will be shown in the Book of Remembrance as well as on any future replacement plaques.

The web site went fully “live” in April, 2016 and has received over 1,600 individual users with 5,833 page views the Twitter Feed has 363 followers with postings on average twice a week.

In response to a question, whilst the web site construction had been 100% fully funded from the Heritage Lottery Fund Grant, ongoing server space costs would be our responsibility.

The Archivist received a vote of thanks for his work; his report is circulated with these minutes

No questions were  minuted.

November 11th and 13th Remembrance Services would be held at the Memorial with Field of Remembrance on the 13th and dedication of the Book of Remembrance and the two new plaques on the 11th.

Future developments at the Memorial:

Actual size proofs were on display, it was agreed to create space at the foot of plaque 2 to show symbolically that additional names may need to be added in the future.

We had commissioned one leather bound edition which would be on display in Bramley Library Hub with paperback copy (or copies) also available for handling. Photos were shown where the book would be located.

200 crosses would be placed in our two Wooden Tubs on November 13th, with no cost incurred,

The meeting then moved to an illustrated discussion on the proposed Peace Garden at the Memorial, this was introduced by Guy Smithson of Leeds Council Parks & Countryside and described by the Chair as a good friend of Bramley War Memorial.

With the assistance of panoramic photos and large scale visuals of the proposed developments, Guy described the main proposed features, which would resite the current boundary walls to allow for spaces for reflection  and contemplation and give an increased  frontage with Yorkshire Stone  flooring. There would be fully grown mature beech hedges placed parallel to these areas.

Guy was thanked for his work to date and the subject opened up to discussion and consultation.

Many attendees commented and the contributions can be divided in to the following areas:

In summary there was support for development of a Peace Garden but only if it added to rather than retracted from the current layout.

The Committee was asked to discuss further, but it was also agreed that a more representative visual or model was required to make a fully informed decision.

At the conclusion Guy was again thanked.

This concluded the formal and consultative part of the meeting.

Ian Johnstone reported on the Bramley Baptist War and Remembered Graves Project which looked after some 70-80 Graves and Memorials through a combination of discovery, upkeep and research.

He appealed for volunteers for the fortnightly strimming and cleaning sessions.

Attendees were invited to view a Display of Biographies, Photos and Artefacts; a framed copy of the Illuminated address presented by the people of Bramley in 1917 to Fred McNess VC was also exhibited