Five Bramley families were left grieving for their loved ones following the sinking of the HMT Lancastria off the coast of France in 1940.

The sinking of the Lancastria was the largest single ship loss of life in British maritime history, with estimates ranging between 3,000 and 5,800 fatalities.

Cunard liner Lancastria had been pressed into war service as a troopship and was anchored just outside the harbour of St Nazaire, France on Monday, June 17, 1940. She was helping to evacuate thousands of British troops as the German army advanced France.

A lone German bomber sent four bombs plummeting towards the ship, two hitting the sea nearby, while one smashed through the dining salon, and the other, according to witnesses, went straight down the funnel and detonated in the engine room. The ship sank within just 15 minutes, trapping many in the lower decks.

Heavy loss of life also occurred amongst the hundreds floating around on the sea when enemy planes swept in to machine-gun the struggling mass of people in the water.

Among those who lost their lives locally were:

Herbert Pratchett, aged 40. He was the husband of Nellie and his son Arthur Felsted Patchett died in Germany aged 21 in 1945.

Harry Quarmby, aged 32. He was the son of Herbert and Jane Quarmby and the husband of Gladys.

George Fowler 39, husband of Rose Fowler. He was an engineer in the Pioneer Corps, building  airports, roads and bridges. He was believed to be helping to rebuild the airport and Nantes.

“Although we heard about the Lancastria in June, it was December 18 before we got the telegram. I was only very young at the time but I remember my mother at the kitchen table working. She’d pull this telegram out and start crying. She never mentioned that he died but I knew by the way she was crying. I still remember it as if it were yesterday.”

George Fowler is buried in the town of Les Sables d’Olonne in France where his body was washed up. It is said that bodies of the deceased washed up all along the west coast of France and were buried in towns and villages there.

This summer Ray (pictured) and family made their third pilgrimage to pay tribute to George Fowler. 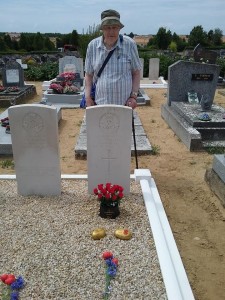