We write to inform you of a momentous occasion being organised by Leeds City Council with assistance from Friends of a War Memorial for Bramley to take place at Bramley War Memorial, Leeds on Thursday 15th September 2016 @ 2.00 pm. The event is to honour an extremely brave soldier, Lance-Sergeant Fred McNess. He is the only serving military person from West Leeds to receive a Victoria Cross (VC), which was awarded for his extreme bravery during the Battle of the Somme, 100 years ago on the 15th September.

In his honour there is to be a Commemorative stone unveiled at Bramley War Memorial This will be the unveiling of the second VC Commemorative Stone in Leeds this year. The ceremony will be attended by the family of Fred McNess a large contingent of Scots Guards and The Lord Mayor of Leeds and local MP Rachel Reeves with the service, dedication and blessing being led by Reverend Paul Crabb.

In addition there will be circa 50 veteran Scots Guards, Royal Artillery and Royal British Legion Standard Bearer personnel to march onto the ceremony.

Also in attendance will be one Piper and one Drummer (Bugler). The Piper positioned so that he can slow march away from the Memorial when he plays the lament.

The citation is to be read by Regimental Adjutant Major James Kelly.

The unveiling of the stone will be undertaken by family members of Fred McNess who are traveling the length and breadth of the UK to attend. 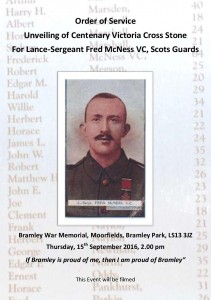 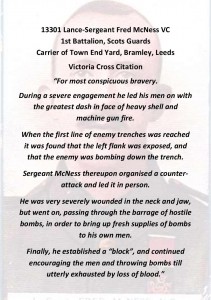 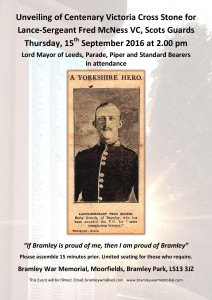